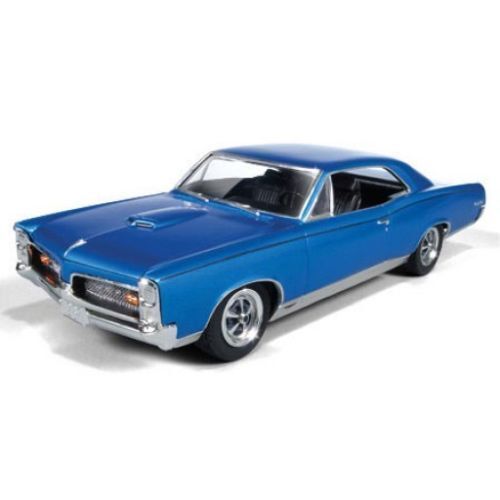 Model Products Corporation released their first model kit, a 64 Chevy Corvette Sting Ray at 1:25 scale, in 1965. Unlike other model kit manufacturers, such as Airfix or Revell, the company followed the business trend of AMT, focusing on the manufacturing of model cars and pickups in mostly the 1:25 scale. Many of their vintage models are available for collectors to build and paint, under the MPC logo and early releases in AMT packaging.

Why are MPC kits limited in automotive brand model selections?

Some American plastic kit manufacturers such as Revell decided to offer a selection of kits covering many international brands, while other model kit producers, like AMT and MPC, decided to focus more on kits based on American model cars and trucks. AMT, ERTL, Revell, and MPC also had to sign contracts with automakers to produce kits that represented a particular car brand or model. MPC built a working relationship with GM and produced popular Chevy and Pontiac model kits. These contracts also forced them to produce less popular kit subjects, such as models of the Chevy Vega. Licensing for a popular kit, like the full-sized Impala, would trade back and forth between AMT and MPC. Licensing was for limited runs and had to be renegotiated often. A surge in kit offerings of Camaro and Corvette models is an example of renewed contracts between MPC and GM in the late 1970s.

Did MPC produce model airplanes from their own kit molds?

Unlike the other major American kit manufacturers AMT and Revell, MPC did not create their own airplane models. As they focused on producing model cars and trucks, they formed a working relationship with the major European Revell competitor, Airfix. MPC would take Airfix aviation models and repackage them as their own kits for the American market. This type of rebranding was practiced by all major American model companies including AMT and Revell.

What MPC Dukes of Hazard models are available to build?

MPC produced kits of many of the most popular cars and trucks from this show. Of the five kits that they made, two were models of Daisy Dukes vehicles that she drove through the series. Two popular vehicles overlooked were Boss Hoggs Cadillac and Uncle Jesses pickup. This was likely due to licensing issues. Many of the models packaged under the Dukes of Hazard theme were actually previous items that were simply repacked with appropriate decals and updated instructions. The five releases were:

Content provided for informational purposes only. eBay is not affiliated with or endorsed by MPC.