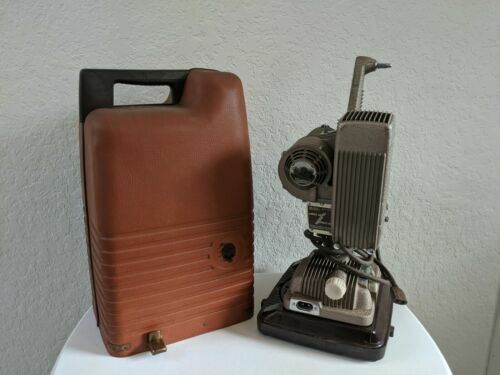 Established in 1920, Revere manufactures car parts, household products, and camera equipment. The Chicago, Illinois, firm began with a line of 8mm cameras in 1939, and by the 1950s, it became the second largest small camera manufacturer in the U.S. after adding 16mm cameras and projectors. Vintage movie projectors are a fun way to gather family together and look at old videos and reminisce about the past.

How does a 16mm projector work?

Projectors run a film through a sprocket system at a speed of 24 frames per second. A movie projector includes a film or feed, reel, and a takeup reel. A motor powers the device, feeding a spooled film through a gate where a light source illuminates a single frame at a time.

What are the types of 16mm vintage projectors?

Projectors differ by light source, threading, and sound capabilities. Their light source can be the following:

Shooting with 16mm film began in 1923 during the silent film era. Projectors manufactured during this time can only project silent movies. These units can handle 400-foot reels. These continue to be used as projectors for amateur and hobbyist filmmakers.

The advent of sound meant a new line of sound projectors in the 1930s. These included models with conventional tubular lamps, vacuum tube amplifiers, and manual threading. Some used halogen lamps while others did not. They could handle up to a 2000-foot reel.

What can you watch on 16mm movie projectors?

Use a sound projector to watch silent or sound movies. You can view home movies or your own creations. This movie format was used often during World War II in the field. During the post-war era, it became a "go-to" format in professional filmmaking, especially in industrial films.

Television production used 16mm film for news programs due to its portability and lower cost than 35mm. It has also been used in the filming of motion pictures, especially independent films, shorts, and cartoons. The format is still used widely today in TV. It is used to film the "Hallmark Hall of Fame" anthology, "Friday Night Lights," "The O.C.," "The Walking Dead," "Doc Martin," BBC programs, and the motion pictures "Clerks," "The Hurt Locker," and "Leaving Las Vegas."

Content provided for informational purposes only. eBay is not affiliated with or endorsed by Revere.