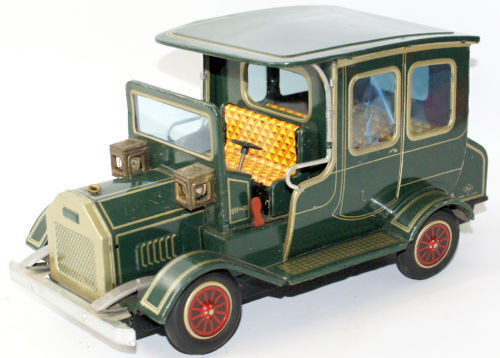 Tin toys gained popularity in Japan in the late 19th century through the mid-20th century. Originally, production was dominated by Germany, however, Japans cheaper costs allowed its market to grow. Aimed at the American consumer, manufacturers constructed them from tin plate. Japans production increased after WWII, and remained the worlds largest manufacturer in the metal toy industry until the mid-1950s. Companies in Japan utilized technologies such as chromolithography and punch machines to create imaginative, precise toys in bright, appealing colors. Masudaya, Kuramochi, and Saito are brands that people know for their trains and tracks, sea and air vessels, and merry-go-rounds, while people know Bandai, Ichiko, and Marusan for their intricate automobile toys.

These days, vintage tin toys are popular collectors items among antique enthusiasts. Rare tin toys, or those that are that in their original box, fetch incredibly high prices among serious toy collectors. Those which are less valuable are every bit as valid as they were many years ago with their sturdy design able to withstand rough play. With the advent of plastic toys, tin toys swiftly went out of production in the 1970s, and are becoming much more difficult to find.

Which Types of Tin Toys Are Popular?

Created with the play of baby boys and young boys in mind, the majority of tin toys are boyish with plenty of cars, motorcycles, boats, and robot designs, which in todays world are retro and vintage icons of yesteryear. Girls didnt miss out entirely, however, with animals and dolls also produced.

Which Materials Are Used To Manufacture Japanese Tin Toys?

After World War II, production of tin toys shifted from Germany, which always had the lions share of the market for its quality product, to Japan. Japanese manufacturers borrowed heavily from German techniques and swiftly developed its own craft methodologies.